What is a circular economy?

What is a Circular Economy? What makes an economy bioregional? In this article we explore the potential benefits and pitfalls circular economics.

Each year, people around the globe buy more than 1.5 billion mobile phones. Each year, more than half of these phones are destined to end up in landfills or sitting at home without any use, as their owners upgrade to newer versions.

The above exemplifies the extreme production and waste of our current economic system within a linear model. So… what’s next?

Welcome to a Circular Economy

Imagine, instead if these devices went back to the manufacturers once their lifespan came to an end in order to be turned into new mobile phones. How much would that save the planet, manufacturers, consumers in terms of resource extraction, raw materials and time – or even better, what would be the result if these phones didn’t have to be sent back at all – and were simply just repaired & upgraded as needed?

Welcome to a Circular Economy.

A model of production and consumption that shifts our thinking from short term consumerism, to expanding the lifecycle, durability and re-usability of products to ultimately reduce their impacts impact on the environment and our society as a whole. Circular Economies move us from the linear take-make-dispose economy we have now and encourages us to rethink extraction, waste and energy use. It’s an invitation to redesign our production processes, supply chains, and create circular, whole picture lifestyles.

What elements are impacted by a Circular Economy?

Right now, circular economies are simply talked about as a shift to circular supply chains. The largest proponents include Starbucks, General Electrics, Amazon and many other huge players in microchip & manufacturing technology, and global logistics and distribution. Some have the best interests and goals at heart, others just seek to expand their profit bases – usually a mix of both.

While the intentions are good, there is also no underlying ethics built into the discussion. Circular Economy is simply about shifting our production / consumption supply chain. It works just as well under capitalism as socialism, under fascism as well as democracy. Right now it is being promoted as a globalism model, and it certainly stands to benefit the largest corporations able to seize on the advantages of a global

For example, in presentations on circular cities in Seattle, the Amazon Sphere’s in downtown the downtown headquarters is used as a great example because of it using off heat from Amazon’s server banks, and catching & filtering water. No where present in the discussion is Amazons overall energy and waste stream impact, that it is closed to the public, or the massive income displacement and inequality presented by the construction of the Amazon campuses in the first place, including the overall removal of the neighborhoods, parks, trees, and houses, creating the effect of increased dependency on a centralized corporate economy, rather than a decentralized community based one.

Can Circular Economies be Bioregional?

A bioregional economy simply means a society that transforms itself to stay within the needs of nature, rather than conforming nature to its need. In addition, it works within the carrying capacity of a defined local area based on bioregional units (natural borders & the human cultures that have adapted within them – cities, watersheds, ecoregions or bioregions), and also including an underlying ethic of responsible & compassionate consumption.

A bioregional approach challenges every aspect of our current economic value system and seeks to create a new ethic that prioritizes localization, fitting into a global network of responsible consumption, and a radical reorientation of from profit and expansion to towards livability and system wide well being.

Why do bioregions even matter?

Bioregions are the worlds natural countries. They are the largest geographic areas where cultures based on place make sense, and more than that – are also the smallest scale at which a region can be self-reliant. Nature ignores manmade borders. Whether we are talking about flooding, wildfires, salmon recovery, economy, transportation, growth planning and government, taking into account the entire watershed, and making sure every community that might be impacted by a decision has a voice is critical.

Rather than a global approach that begins from the top and works its way down – bioregions start with self reliant units – and build upward, with a defined system of ethics to ensure that consumption & production is not only sustainable – but responsible, transparent, and supporting of all inhabitants and basic human rights.

As bioregionalists, what is our next step?

Circular cities, circular economies – self reliant bioregions that regenerate our soils, putting more into them than we pull out, ecosystems that support all of our inhabitants – human and other – that is our vision and goal. It’s also our job to be educated, knowledgeable, and informed – to research each scenario with a data driven approach, and ensure that good ideas aren’t coopted away or greenwashed with misleading information.

To do that, we must make sure that Circular Economy models include:

Thank you for reading. Anything I missed? What other great ideas are there? Leave your thoughts below in the comments and I’d love to start a dialogue.

Brandon Letsinger is an open source advocate, bioregionalist, movement builder, founder of CascadiaNow!, the Department of Bioregion, and the Vice President of the Cascadia Association Football Federation. He is a historian, keynote speaker, leads bioregional mapping workshops and also runs Horizon Books in the Capitol Hill neighborhood of Seattle, WA.

Originally published on brandonletsinger.com. You can check out more at: 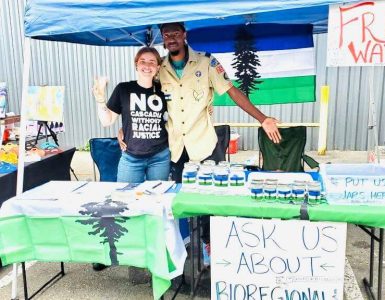